- November 07, 2011
The fall video game season is in full swing and is forcing gamers to make some difficult choices. Already Gears of War 3, Forza Motorsports 4, Batman: Arkham City, and Battlefield 3, have hit the shelves to rave reviews and record sales. To the casual observer it would seem that fall tidal wave of new games is over…but the biggest have yet to drop. On Tuesday, Call of Duty: Modern Warfare 3, the undisputed First-person Shooter juggernaut, is unleashed on gaming-dom. Just three days later, on Friday, The Elder Scrolls V: Skyrim enters the scene to the joy of RPGers everywhere. Finally on the fifteenth, the final chapter of Ezio de Auditore di Firenze grand adventure concludes in Assassin’s Creed: Revelations.
For shooter fans there are many great, albeit very different, games before them. Gears 3, concludes the fantastic story of humanity’s desperate fight against the Locust horde, a group of mutant creatures that burst forth from the depths of the earth and have humanity on the brink of annihilation. The game play is fluid third-person over the shoulder and integrates one of the businesses best sticky cover system. Fans of the series will not be disappointed. Customizable weapons skins; new multiplayer maps and the return of horde mode are not to be missed.
Battlefield 3 offers large-scale first-person tactical combat integrating vehicles and a class based infantry system. The levels are very well designed and the weapons and perks are well balanced. Admittedly, there is nothing like hopping into a match with friends and getting behind the controls of an F/A-18 Hornet to dominate the sky and provide close air support, while your buddy thunders toward the opposing team in an M1A1 Abrams tank and your little brother covers your advance from behind the scope of a bolt-action .50 BMG sniper rifle. Unending action and very gratifying victories to be had in this large-scale combat simulator.
MW3 is released on Tuesday to the anticipation of all, finally resolving the Hollywood worthy story of Price and Soap, two members of the British 21st SAS and their struggle to clear their names and expose the treachery of a rogue US General hungry for war against the Russians. The multiplayer is said to be tight and fluid, as always and has a host of new features and tweaks to better balance the experience when compared to MW2. No vehicles to be found here though, and with much smaller maps Modern Warfare will be a much more frenzied affair when compared to the strategically minded Battlefield 3.
RPG and adventure fans fear not as your ship has arrived as well either returning to the lands of Tamriel, Gothem, or historic Istanbul. Rocksteady’s newest caped-crusader affair Arkham City has received rave reviews and is being touted as one of the best superhero games to date. With dynamic combat, ingenious Batman gadgets and an open world design, it is hard to argue the praise the game has received. However, anyone who has invested their time in the Assassin’s Creed universe will find it hard not to delve into the rich world Ubisoft has created around the conspiracy of the Templar’s to control humanity and never-ending struggle of the hashishin (assassins) to defeat the Templar order. Ezio, now one of the leaders of the Assassin guild has left his home in Italy to track down and eliminate the remaining Templars. Istanbul promises to deliver Ubi’s trademark grandiose visuals and historically accurate cityscapes. Multiplayer returns with a number of new modes, weapons and skins for the weekend warrior-assassin, rounding out what promises to be an epic end to an amazing tale.
Finally, Skyrim, the fifth installment of Bethesda’s Elder Scrolls series should reset the bar by which RPG’s are measured. In an already lauded series Skyrim chooses to innovate and improve rather than rest on its laurels. The leveling system has been completely reworked…wonderful news to Oblivion acolytes. A brand new engine runs the visuals and look tremendous. Finally a new approach to combat has been envisioned. Each of the player’s hands can be equipped with anything one wants. A classic sword and shield…sure, no problem, double axes? Yeah, why not. Sword and fire spell? Check. But what about two of the same lightning spells…one in each hand. Well, this is where things get interesting; not only can that be done but in fact this creates an entirely new and much, much more powerful spell that strikes out when cast. Mages and wizards rejoice your wishes were not overlooked during the development of this game.
No matter what your fancy, from shooters to racing, or RPG to adventure/platformer, the next few months will be filled with happily sated, though decidedly poorer gamers.

Popular posts from this blog

- September 27, 2013
The new central branch of the San Diego Public Library opens for a sneak peek tomorrow, September 28th. There will be all day festivities with authors, speakers, and more! Check out their schedule of events at:  http://www.sandiego.gov/public-library/pdf/2013/sneakpeekprogram.pdf It should be a fun event to stop by if you can! The library opens officially on Monday, September 30th.
Read more

T2K- how to address a letter

- April 01, 2020
We are launching a new series for Teens called T2K: Things 2 Know! In short, 2-5 minute segments, we will cover topics from how to address an envelope, how to shut off water to your overflowing toilet, and more! Each segment aims to show you a valuable skill that you might not learn in school! Click  here  to learn how to properly address a letter!
Read more 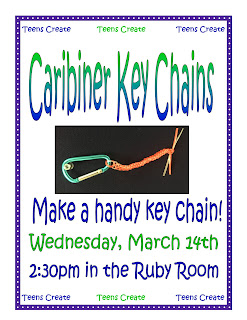 Jacqueline Luna
I'm Ms. Jacqueline, the teen librarian at the Coronado Public Library! I am excited to share news about the teen library here with you! (Posts written before December 2012 were written by my wonderful predecessor, Eileen Lawson, but blogger replaced my name with hers when I took over the blog.)